The past month I have mainly been working on the galaxy map screen to make it more informative but still trying to keep it very minimal. 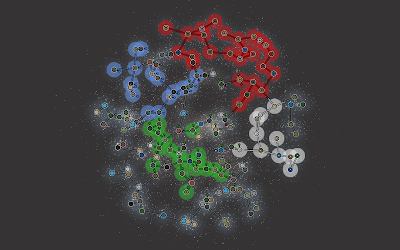 The sector icons are now colored to show the different planet types. Surrounding each planet there are small circular icons to show if there are any ships in that sector. (green = player, red = enemy, blue = allied, white = neutral)

It hasn't been implemented yet, but you will be able to hover the mouse over the ship icons to display the number and class of ships at the planet. Hovering over the planet icons will also show more information about them. 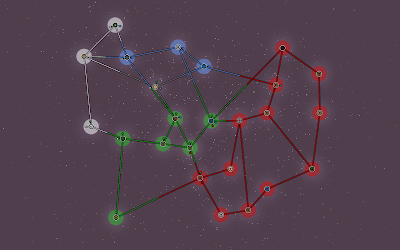 The jump-gate links and borders are colored based on the owning factions relations to you.

There may be more than one enemy/ally that will show the same colored border and jump-gate links. So to distinguish each faction, the smaller circle at the center of each planet icon will be used to show its unique "faction color".

However this is not shown in the screenshots as the faction and relation colors are currently identical for testing. 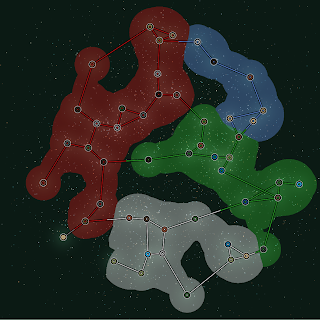 I have also experimented with rendering some "sphere of influence" style empire borders, but ran into performance issues with the really large maps. I think it maybe covers up too much of the screen, hiding all the stars in the background which look nice as you move around the map. (the stars use 3D positions)

I have abandoned this approach for now, in favor of the smaller overlapping borders you can see in the first two screenshots. 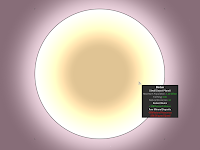 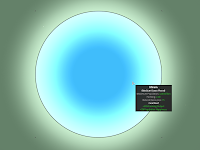 Colors used for each of the different planet types have been tweaked slightly. Volcanic was difficult as the planet graphics are limited to just one color and no detail. (lava or rock?)

Each of the types (Temperate, Desert etc.) have a few variations so they won't all seem identical. 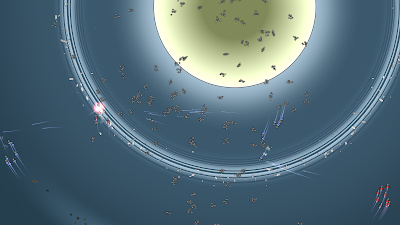 (The leftovers from a large cruiser battle)